The Librarian is appointed by and reports to the Provincial Council of the Australian Carmelite Province.

This meditation by Philip Harvey on the painting by Giuseppe Arcimboldo (1526 or 27-1593) was first published on the Library Blog in February 2013.

He stares into the past that made him. We are all doing this, increasingly as we grow older. We have to find a way to explain how we got here. Our experience slowly informs us that there was a time before our own experience, to which we also belong. He stares from 1562 at a lifetime of transformations. Water can be turned into wine but clay still cannot be turned into gold. Not everything pleases him, it can never be all pleasure, yet he knows he belongs to discovery and its consequent treasures. He is full of this discovery, it has made him, we could almost say. He stares across the Atlantic Ocean to what nature does that is different and equally abundant. Within him he contains that information, though he calls it Legend and Report and Assay and Proclamation and Statute. Certainly, nothing in his own constitution would be quite the same without discovery, or its companions, conquest and exploitation. From 1562 the past is a tumult that he would rather keep under wraps. Why, only in living memory England has closed its monasteries and Germany has freely set up its own church and friends of his remember their grandparents talk about the end of the East at Byzantium. The Emperor here in Prague is restless for knowledge too, permitting into his orbit every kind of theorist and experimenter, as if he were the centre of the universe. It is not altogether with a clear equanimity or composure that the Librarian knows these tumults are related to books. That it was books in increasing numbers that enhanced discovery of the differences in people’s minds. He keeps himself together, he doesn’t fall in a heap, has at least these things to keep him going. But authority has come at a cost. His identity must resolve contradictions between one page and the next, or at least live with those contradictions. 1562 stares at the past as at a dream of lost glories. The ruins of the ancients keep him on his mettle. For even though manuscripts are old hat and the scroll could belong in one of the Emperor’s cabinets of catchy curiosities, he must not become conceited. It would be dangerous to presume that you know it all; people like that often finish up being thrown out the window, especially in Prague, where it is a more effective solution than exile. 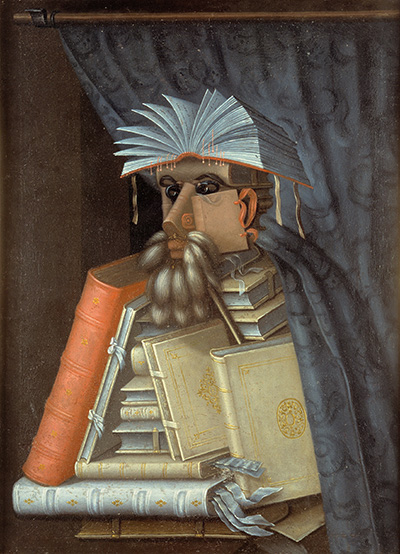 He belongs in the present and can do no other. We are all doing this, possibilities reach out to impossibility. Probability thrashes it out with improbability. His masters want to emulate the ancients, why the Emperor himself would be the King of May. It is a topsy-turvy world, for sure. The green mantle over his left shoulder is that of a Habsburg prince. He though is not a prince but a philosopher, grinding out the slow meal for a new recipe of life. The mantle is stylish, it sends the message. But like the rest of him, it belongs in the present where rust and moth destroy, where princes give with one hand and take with the other. He would copy the prince, he also values his status. In 1562, that can amount to an impressive library. Books made him and he is made of books. Splendid things every week come to his attention. How solid is the present. Or should that be a question? How solid is the present? Carefully bound books seem a sure assertion of his place. Those papers that are his fingers write the laws we belong with. It’s all impressive enough, but is there not something stiff in the manner? Is he too straight-up-and-down to be believable? And will we ever know what he really thinks? Is he, for all his show of knowledge, a closed book? Outside in the streets of Prague the market is orderly racket, a walkway of vivid bartering, somewhere for animals to huff and toy stars to explode. The Vltava is rowdy with geese and trading boats. Whereas in here the silence is closed in. And anyway it’s never like this the rest of the time. Only now has he collected himself together sufficiently to stand a chance with posterity. Most times he’s all over the place, Philosophy at the window over there, History where it happens beyond the stairs, Law when something very wrong happens, only how wrong? His Science side is waiting for updates, his Theology looks tight but will it stand the next test? Why, his whole being could collapse into the proverbial, or turn into a pile of tomes for re-shelving. So for the moment he keeps a straight face, combines an aura of knowledge with a figure resolute with a little brief authority.

He stares into the future, that will be totally unfair to all his achievements. We are the future, for example, who do not know what he really wants to achieve and cannot imagine what a Librarian in 1562 might possibly be up to, and will not care a fig. Just as we care not a fig for the Emperor looking like a green grocer’s window, though we find him curious enough. In his coat of many covers, the Librarian projects the certainties of 1562. Rumours of war, signs in the heavens, the brilliant carnivale of the court – these seem at times just a side product of the certainty of these books. They are the very latest technology, their beings inside and out a testament to the greatness of the new. Some of us gaze in wonder, some of us check the price tags. His future is something we know more about than he can guess, but who are we only hindsighters? By the time it is agreed that the Earth goes around the sun and the sun is a minor star and let’s turn the page, he will have been taken from his imperious place in the palace, heaved across the frozen Baltic Sea, and stacked up in Swedish obscurity. He, who entertained to a nicety the courtiers and boffins of the sparkling age, will rest quietly as an outdated encyclopaedia, if that, for the occasional attention of humourless rationalists. The snow will fall outside. 1562 will be 1625 will be 1652 and so forth. He will be like a joke that has gone flat with time and is not even funny anymore, a joke that another age enjoyed till it split its sides. His future is to be defined by the cut of his cloth. His books are the limit of what was known, not the limitlessness he felt he embodied. And yet the future will not be blind to his existence. It will ponder him as a conundrum, a quirk of humanism, the necessary manager of new thoughts. Even his outfit may come back into fashion, or sprout leaves to reveal the true nature of his calling. The future will try to make a context in which to understand, even if context disappeared or ‘disapapered’ (as the Irish Portmanteau, himself a montage, would say) under Thirty Years of unloving unneighbourly War. The future will try to rewrite the Librarian and in the process make up a new Librarian who is one more collation of collective thoughts. The future flew in the body of a huge metal bird all the way to the fishing town of Stockholm, just to walk down the gilt passageway where the Librarian waits, ready for the latest reference question, ready to show you what he has in store.