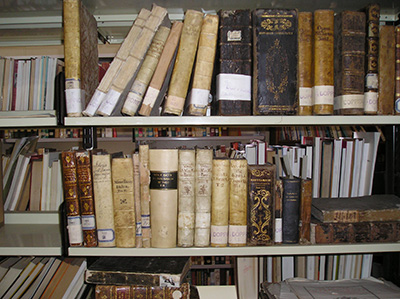 The Carmelite Library is Australia’s finest specialised collection of books and journals in the area of spirituality and mysticism. It has been called “a national treasure”.

The Library belongs to the Australia-East Timor Province of the Carmelite Friars, a Catholic religious order which originated on Mt Carmel in the Holy Land in the late 12th century and has been in Melbourne since 1882.

When the Carmelites first arrived here in 1881, they brought the nucleus of today’s Carmelite Library with them.

Most of their books were practical aids to their pastoral ministry, but even some of these were already venerable items. Among these treasures were the Ceremoniale of 1616, which guided the priest through the intricacies of celebrating Mass according to the Order’s ancient Rite of the Holy Sepulchre, which dated to the time of the Crusades. There were also the Carmelite Constitutions of 1625 (reprinted 1721), then still in force, and some eighteenth-century liturgical books.

It is probably also from this time that the Library has Daniel of the Virgin Mary’s Vinea Carmeli (1662), a collection of documents and treatises about the history and spirituality of the Order, and the three-volume 1757 folio edition of the Doctrinale of the English Carmelite theologian Thomas Netter (d. 1430).

From these beginnings the present Library slowly took shape.

In 1928 the Carmelites decided to train their Australian novices and students in Melbourne rather than send them to Ireland. From this time an academic library began to develop at Whitefriars House of Studies, which was first in Kew and from 1937 in Donvale.

Naturally the library collection included the textbooks and other works which were required by the students and their professors across the broad philosophical and theological range of the seminary curriculum. The collection also reflected the particular characteristics of the Order and its long spiritual tradition.

From 1955 to 1979 Fr Brian Pitman was librarian. His wide-ranging theological interests and astute buying made the Library, despite its comparatively modest size, a particularly well-chosen collection, with special strengths in scripture, systematic theology, and spirituality. As in most monastic libraries, there was also a considerable eclectic element, reflecting the varied interests of the community over the years. In recent times it has been further enriched by donations of scarce items, especially from other Carmelite libraries overseas and from religious communities at home.

By the 1980s financial pressures, the development of new theological centres, and the Order’s changing educational strategy suggested a change of policy and a different vision.

On reflection, it appeared to the Carmelites that specialisation would make their Library a more significant theological and cultural resource for the community in Melbourne and beyond, and allow inevitably limited financial resources to produce the maximum benefit.

In 1990 it was decided to discontinue collecting across the whole range of theological disciplines and to concentrate in three areas closely associated with the life and spirit of the Order. These are: